How many headlines have we read in the past two years that have put Sydney property owners into a cold sweat about the value of their home? It’s hard to resist the panic when headlines scream “15% price falls and more to come!” Let’s take a deep breath and think about this for a moment. With Sydney house prices falling, does every property actually lose money?

The short answer is: we’ll never 100% know. Median prices are misleading (if you want to know why, listen to this podcast episode) and we don’t have an exact read on what every property was worth at the peak and then what it would sell for now. The next best thing is to look at actual case studies. I’ve been gathering information on properties located within a 10km radius of Sydney’s CBD that have been bought and resold between January 2016 and June 2019. I’ve found 50 such properties and guess what? They didn’t all sell for less than the vendor paid.

I can almost hear you say, “yeah but those that made money had probably been renovated”. Not so, nearly every property on this list was bought and resold in the same condition.

Before we delve into the insights I’ve gleaned from these case studies, there are some key dates to be aware of. The boom ran from the very end of 2012 until June 2017. There had been a little dip at the end of 2015 before prices took off again in January 2016, rising every month right up until June 2017, which is now well accepted as being the end of the boom. Sydney median prices then started to fall month after month, accelerating throughout 2018 until, by the end of which, according to Corelogic, prices had fallen by 10.4%. Numerous commentators continue to report falling prices as we progress through 2019, however these case studies show that in the inner suburbs the rate of decline has definitely slowed.

What leads people to sell in a falling market?

When I started this research I thought I’d only find a handful of properties that had resold within such a short period, particularly given the market conditions. Instead, I’ve been surprised at how many people have held their property for under two years. There’s even a handful that were resold within a 12 month period and every one of these owners lost money.

How many property owners panicked and bailed? How many sold because they got divorced or into some sort of financial difficulty? How many had simply bought the wrong property in the first place due to FOMO (fear of missing out)?

Some people lost money because they managed to pick exactly the top of the market and paid more than the property was intrinsically worth. Small homes in Stanmore, for example, had become noticeably expensive in early 2017, so it’s no surprise that a little house on Myrtle Street that originally sold in May 2017 dropped in price when it sold again exactly 2 years later, even though that’s one of the best streets in the suburb. 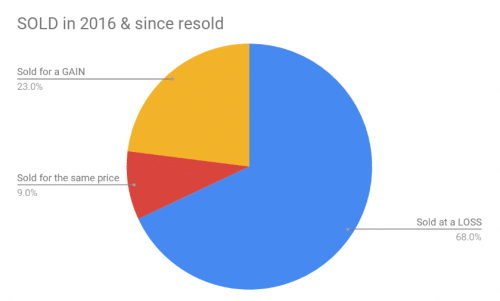 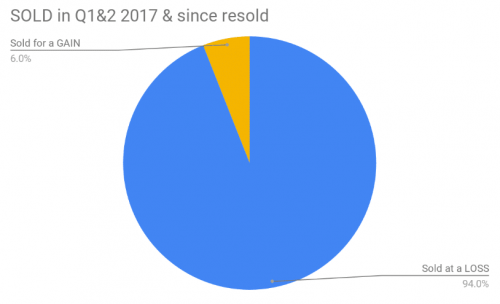 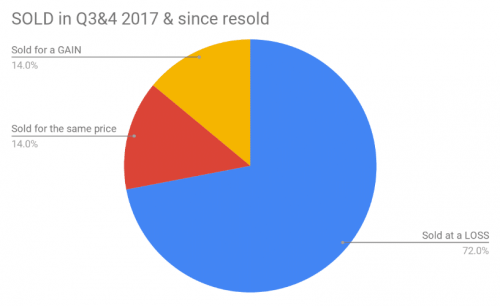 Sometimes the low sale price was the result of a panicked agent advising a panicked seller. Some agents were behaving as if the market will never be the same again and advising their owners to get out while they can. I even heard one use the phrase, “don’t try to catch a falling knife”. This is just plain bad advice in an inner Sydney suburb. Things will always improve at some stage. An experienced agent knows this, they’ve seen it all before and they can advise a vendor who is not under financial pressure to put things in perspective and wait it out. The post-boom circumstances in established Sydney suburbs are simply not as catastrophic as those experienced during a mining town price crash, for example.

From our own experience on the ground, it was quite clear (hindsight is a wonderful thing) that the worst time to sell was in the second half of 2018. This is borne out in the research, which shows of those properties bought towards the end of the boom that changed owners last year, 86% did so at a loss. These owners really took a bath, which makes me wonder whether FONGO (fear of not getting out) played a part.

Notice, however, that not every property fell in value. In fact, 14% either held ground or increased in price. This goes to show that not every property is subject to the prevailing conditions. Over such a short timeframe, any number of variables can prevent a loss – quality of property, not overpaying in the first place, choice of agent, luck.

One case in point is a house in Cremorne which was poorly located on its block of land. Set at the very rear of a triangular lot, by rights this should have fallen in value, but it didn’t. Why? Possibly luck had something to do with it. It happens every now and then.

What we can see through these case studies is that the rate of price decline has considerably slowed in 2019. This year, 33% have actually sold for more than their boom time purchase price, leaving 67% having sold at a loss, compared with last year’s 86%. 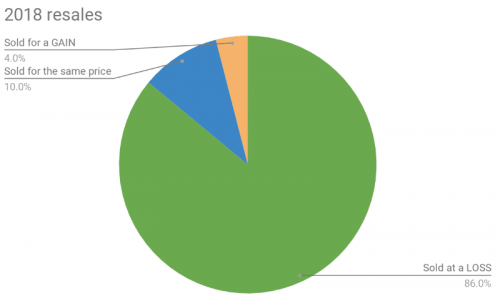 I’m calling it now – in the inner suburbs of Sydney, we’ve seen the bottom of the market*.

The panic merchants have sold, vendors who were caught in the transition from boom to bust have sold, those in financial difficulty have sold, Labor didn’t get in and remove negative gearing, we’ve had an interest rate cut, more are expected and agents across the board are complaining of a shortage of listings.

Vendors who don’t have to sell are waiting for prices to rise. Buyers who have been waiting for the bottom of the market are lining up again at open houses. Auction clearance rates have been above 60% since the election and even reached 71% on one particularly buoyant weekend. I’m in no way saying prices are on the way up, I just think the knife is no longer falling.

Property is a long game.

When people are busy knee-jerking to doom and gloom headlines about the property market, they’ve lost sight of one enduring principle – that real estate is a long term proposition. It has to be, given the entry and exit costs. Even if an owner resold within a 2 year period for more than they paid, they’d be unlikely to recoup their buying & selling costs. If they sold for the same as they paid, they’ve burnt about 8% of the sale price in stamp duty, agent fees, and legals, not to mention holding costs such as mortgage interest, rates and maintenance.

There are foundational principles we apply when evaluating property for our clients. We evaluate every property and assess its calibre as an asset. A quality asset in a solid location will out-perform the majority of the market over the medium to long term. Some properties are simply poor assets – such as one house included in the research that’s located in Newtown opposite an electrical substation and almost adjacent to the train line. This struggled even in the boom to sell so it’s a no-brainer to lose money when buyers evaporate.

When buying in a hot market, FOMO can lead people to rush and buy the wrong property. If they buy at the peak and pay too much, then need to resell quickly, they WILL lose money even if they buy an A grade property. Every property bar one that sold in the 6 months leading up to the peak has onsold at a loss. Yet when they buy a quality asset and commit to holding it for the long term, this short term hiccup would iron itself out over time.

This research demonstrates that the three factors that had the greatest impact on whether or not an owner sold at a loss were:

My advice to all property buyers is to plan for contingencies so you don’t HAVE to sell. Don’t put yourself in the position where you are financially over extended OR you’ve bought the wrong property OR you’ve been ignoring the fact your marriage is on the rocks and buying a home is going to be the last straw.

If you follow these guidelines, the next time you see the front page of the paper declaring “Sydney property prices tumbling, 10% wiped off the value of your home”, you’ll be able to ignore it.

* There’s a big caveat to this claim, however, it does not cover new or near-new apartments, where oversupply is a looming problem.

Not All Sydney Property Prices Fall When The Market Slows

Is it a good time to buy property in Sydney?

DISCLAIMER: Good Deeds buyers tips are intended to be of a general nature. Please contact us for advice that is specific to your individual circumstances. You may also need to get advice from other professionals such as an accountant, mortgage broker, financial planner or solicitor.

7 Steps To Buy Your Dream Home

We hate spam too. Your privacy will be protected.

How to Choose a Low Risk Investment Property

We hate spam too. Your privacy will be protected.